As the bus and train we took from Tsumago to Nigeso and back to Nakatsugawa returned us there just before 15:00 we had time to do something else we thought. On the notice board outside the station there was another walk to some castle ruins that caught our eye. The sign said 50 minutes/3.6kms to the Naegi Castle ruins. Presumably a flat course when it only required 50 minutes. 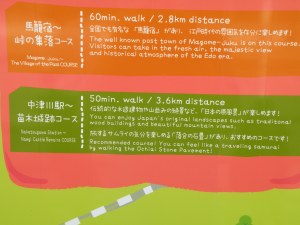 It showed the route in a bit of a vague way but it looked easy enough so off we went, brochure in hand. 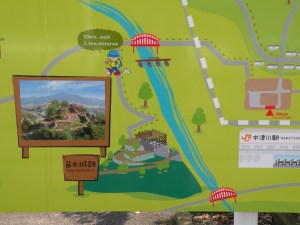 Finding the underpass under the railway line after about five minutes was a good sign. However after walking along the street, instead of crossing a bridge we seemed to be underneath it and by the time our street met the road at the end of the bridge we weren’t seeing any signs to the castle ruins. So if in doubt ask someone. Seeing no one else on the street meant trying a shop and the only shop was a barber shop. “Go in and ask,” said Karen. I opened the door and Karen followed me in. We were greeted by an astonished barber, his wife and their customer in the barber shop chair. Given my lack of Japanese I just said, “sumimasen’ (excuse me) and showed them the picture of the Naegi castle ruins in our brochure, pointed outside and shrugged. They knew what I meant but communication was nigh on impossible between us. Just when an awkward silence came, the customer in the chair said in English, ‘Wait 30 minutes, I drive you.’ We could see the end of the day might make it hard to get there and back so we smiled and profusely said ‘arigato’ (thank you).

As it turned out the customer was not only having a cut and a wash but also a shave so time ticked by. In between times we showed the barber’s wife and the customer some photos on our iPad of Australia, our house and even a video of an echidna in our garden, which amazed them. Finally when all was done the man paid the barber and indicated for us to go with him. The barber and his wife bowed extremely low to the man and also to us. Outside we came to his car, a very new looking luxury Toyota Crown. In we jumped and off he drove. He told us he would go back to his company first but the castle ruins were near there. He asked us a few questions as we drove along but it soon became clear we didn’t speak any Japanese and his English was nearly as limited. Anyhow he made a couple of phone calls as he drove and on arriving at a huge complex he parked and out he got. 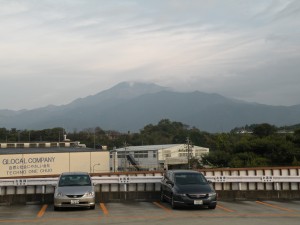 We exited the car also but he said for us to wait there. By now we were realising this man probably owned the company because a couple of staff came running out to talk with him. He disappeared and returned with a young man, who in perfect American accented English, said to us, “so Mr Mio says you want to go to the castle ruins. Come with me. I will drive you.” Mr Mio nodded at us and we bowed and thanked him. Off to the young man’s car we walked. He explained that Mr Mio had an important meeting and had asked him to help us out. His name was Yosuke and he was from the Overseas Department of the company, Glocal, which was a subsidiary of the bigger company we later discovered. We chatted easily as we went. He asked us how we had met his boss, Mr Mio. It amused him greatly that it had been in the barber shop. Apparently one of the phone calls Mr Mio had made from the car had been to him but he was on a conference call and hadn’t answered. So when Mr Mio had gone inside at the company headquarters he had told Yosuke to wind up the call as he had important guests from Australia! We also discovered that he had studied English at a college in America for four years, hence his great English.

It took a few minutes to reach the ruins. Yosuke knew a lot about them and acted as our tour guide. He found it hard to believe that the tourist board at the station thought someone could walk to the castle ruins in less than two hours as it was in quite an elevated position above Nakatsugawa. As we walked around the different levels of the former castle he explained things to us. 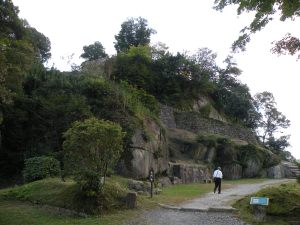 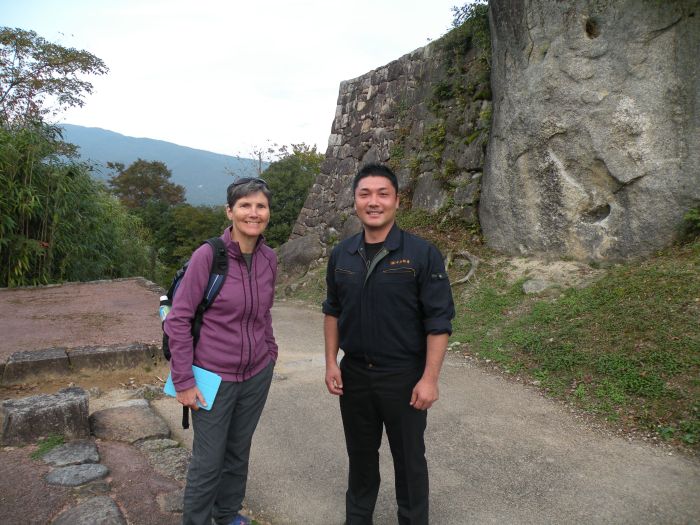 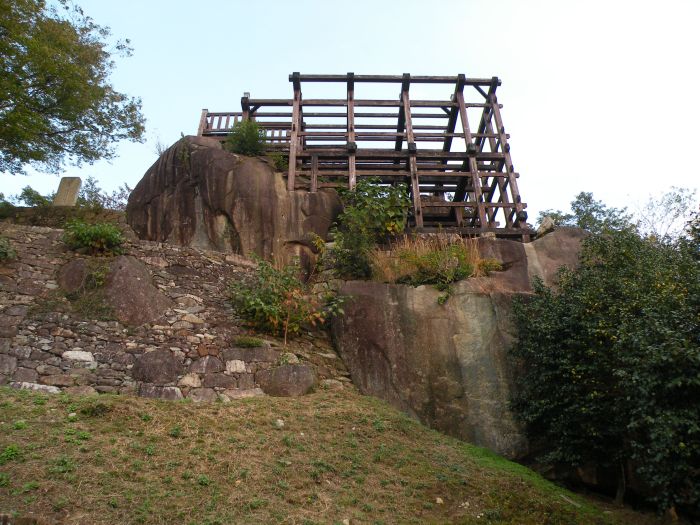 From the top we had an outstanding view but by this time the sun was almost setting so it was a bit gloomy. 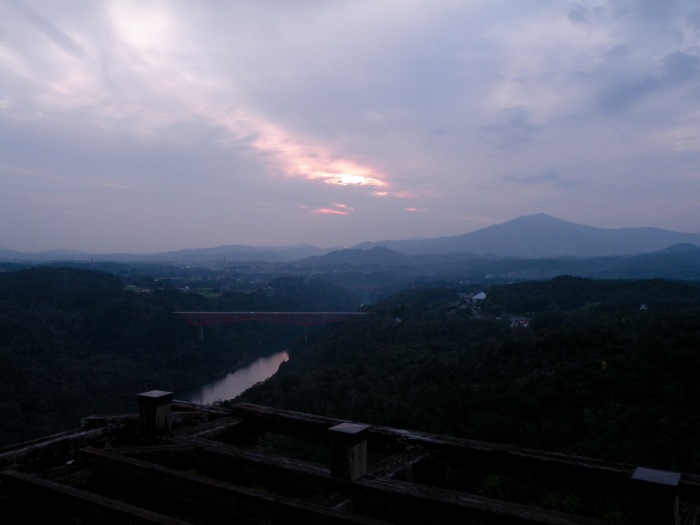 After looking around some more 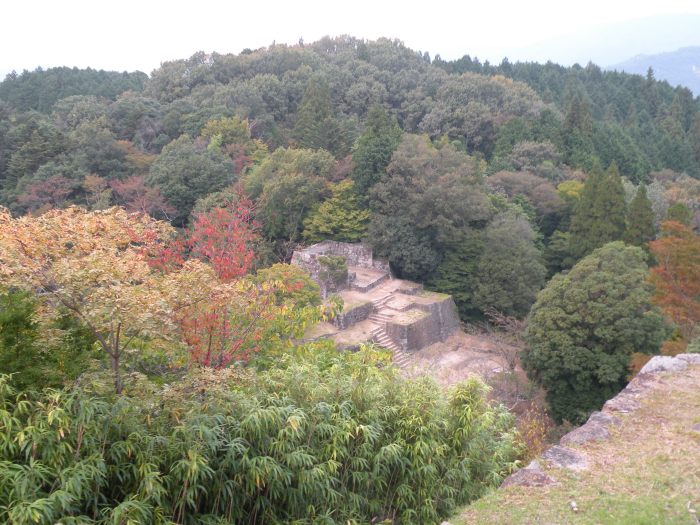 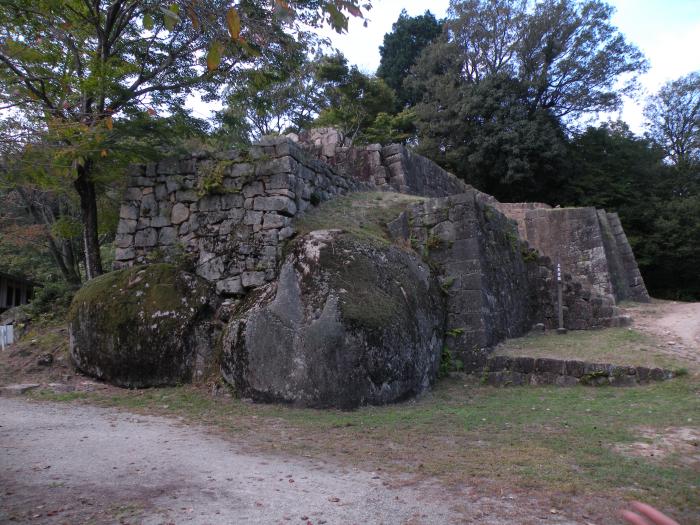 we went back to his car. Yosuke asked us where we were staying and said he could drive us there. We felt this was imposing but he reassured us it was his pleasure. As we drove he asked us would we like to join him for dinner. Again we hesitated but he said he had some English speaking friends that he would invite and that it would be fun. He tried calling them as he drove but no luck. He dropped us at our hotel, the Route Inn, and arranged to pick us up between 19:15 and 19:30 in the lobby. We showered and rested until 19:15 when we took the elevator down. Sure enough Yosuke was already in the lobby in much more casual clothes and with a young lady who he introduced to us. Her name was Aki and she was an English tutor. She was also now driving. We headed back downtown towards the station area and parked. In the car park another car pulled up and out jumped another young lady who he introduced. Her name was Ai and she had worked in New Zealand for some time previously and also spoke excellent English. We ate at Sushai Minami in a section of the small restaurant at the back, away from the smoking section. Yusoke conferred with his friends and they proceeded to order a number of small plates to share. Drinks arrived quickly and we ate a small hors d’oevre set for each of us. The first four or five dishes were definitely Japanese and delicious, 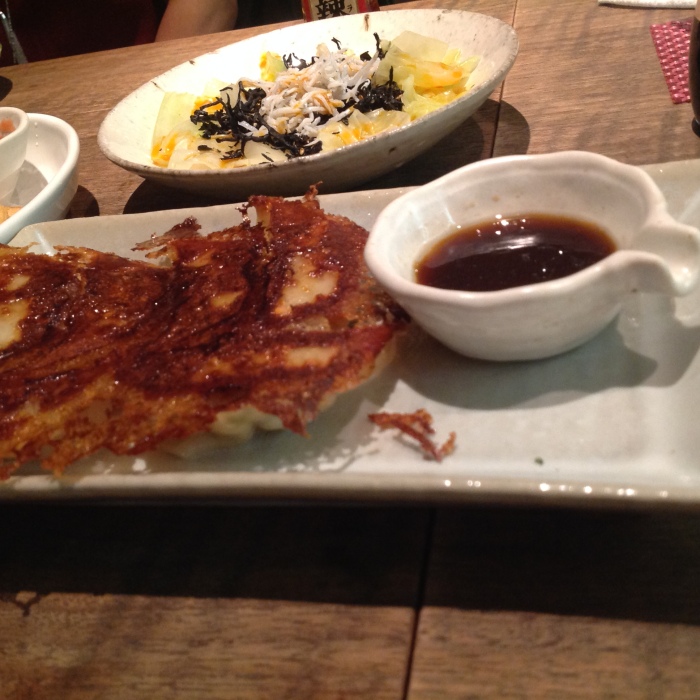 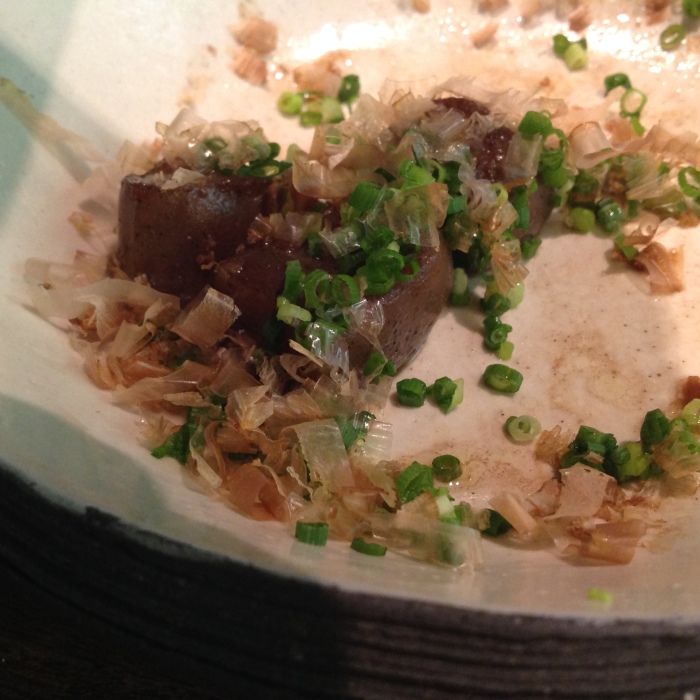 but when some wedges and a pizza arrived Yosuke and his friends were clearly delighted. 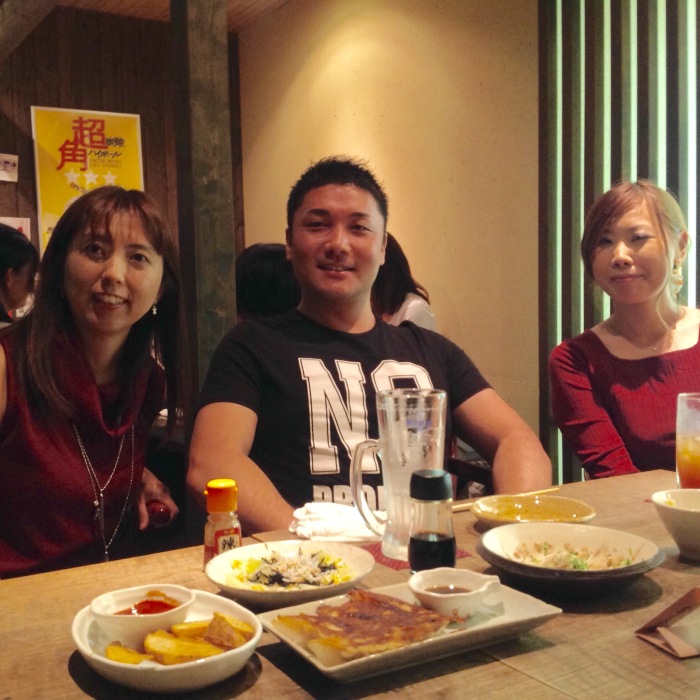 We found it easy to chat with them, as if we had known them for a while. It turned out that Ai was descended from a samurai family and her name Ai = love in Japanese. Aki tutors private clients in English and had been to Queensland when she was younger. More dishes and drinks came. It was all delicious. Quite a banquet. 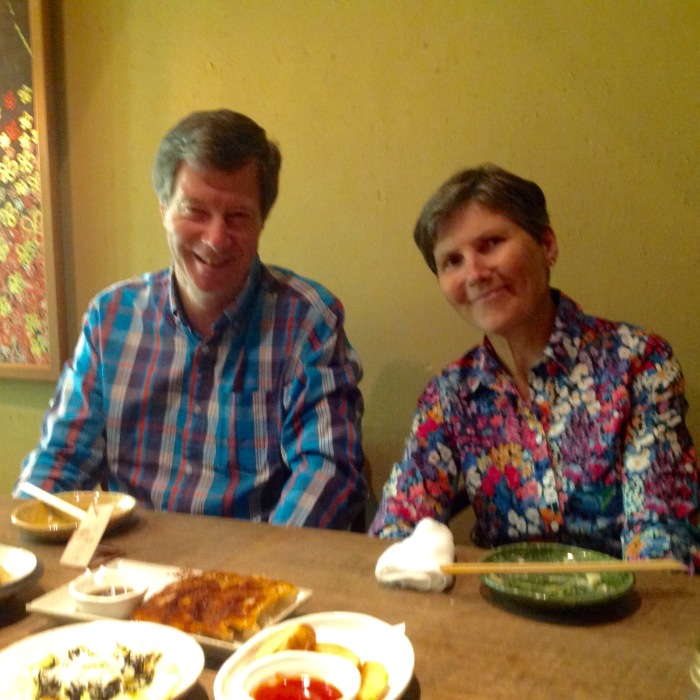 At the end of the evening Yosuke made sure he paid and that the other four of us were clearly his guests. Fortunately we have carried with us some books and calendars from Australia. In this instance we gave each of our three new Japanese friends a book from our home town of Dromana on the Mornington Peninsula. Each of them was very pleased with this gesture, although we felt quite indebted to Yosuke. He travels to Melbourne on business at times so we impressed on him that he should contact us next time so we can return the favour and take him out for dinner. All in all it was one of our most memorable travel experiences ever and totally unexpected. All from becoming a bit lost and asking for help.

2 thoughts on “From Barber shop to Banquet in Nakatsugawa.” 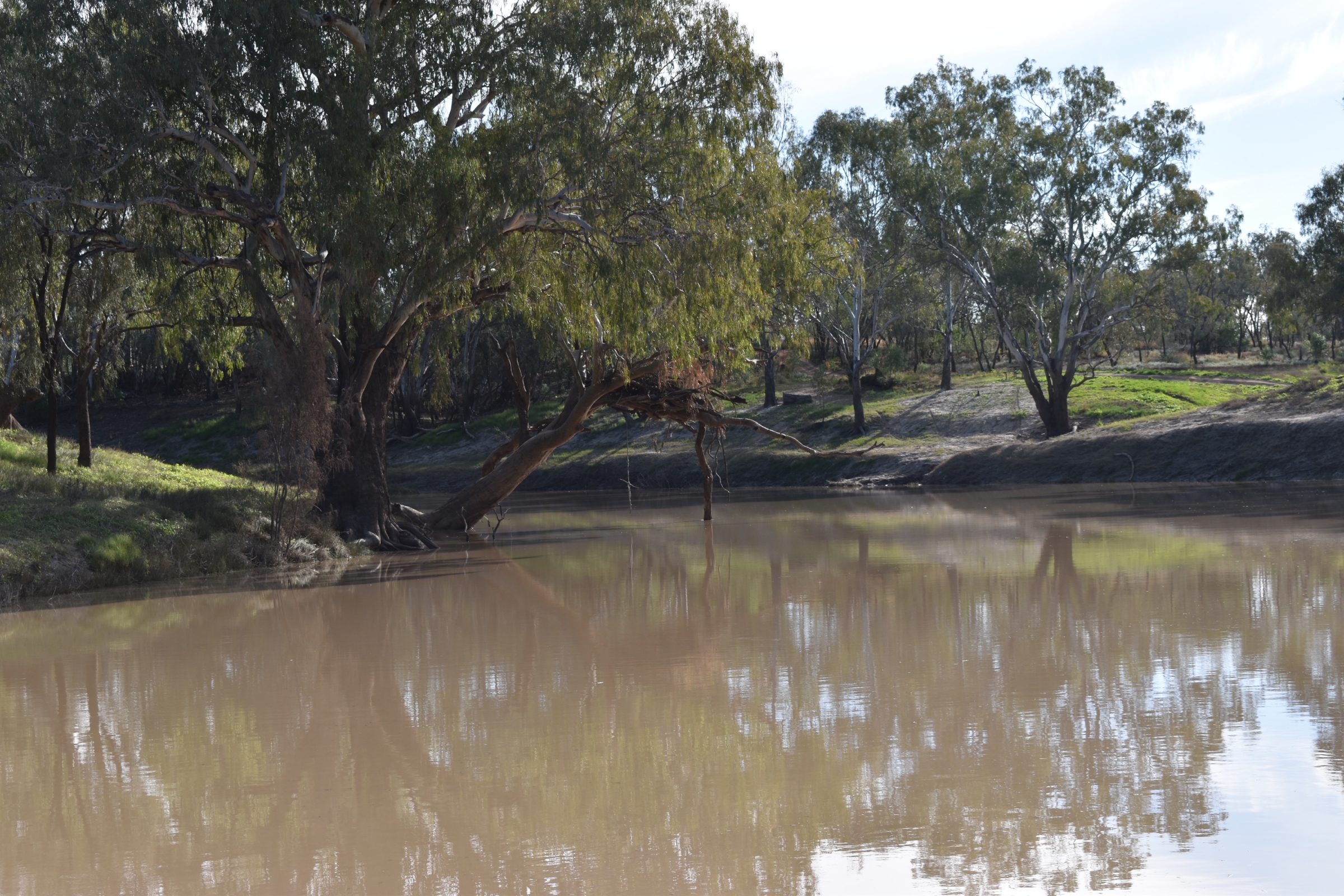 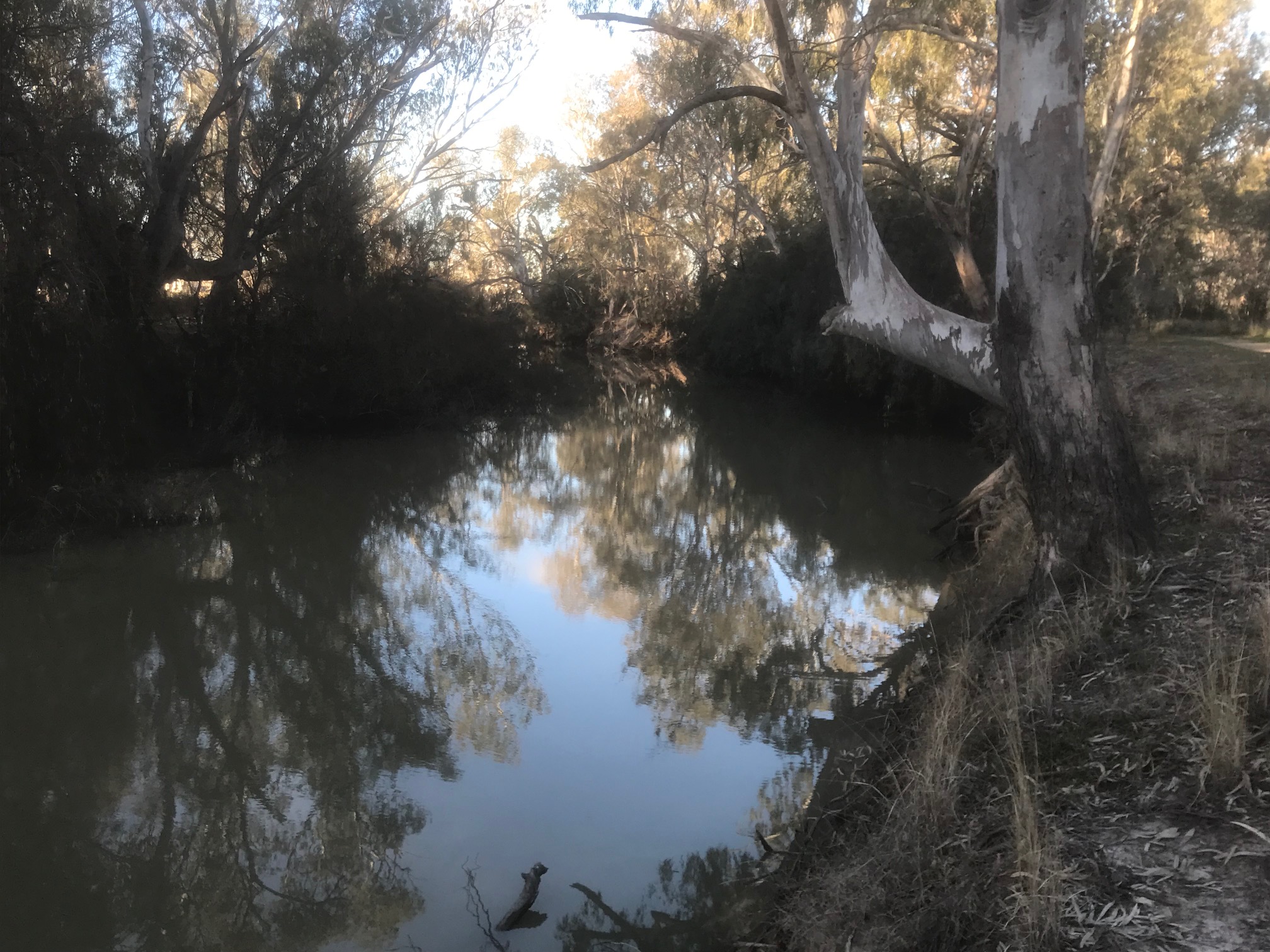 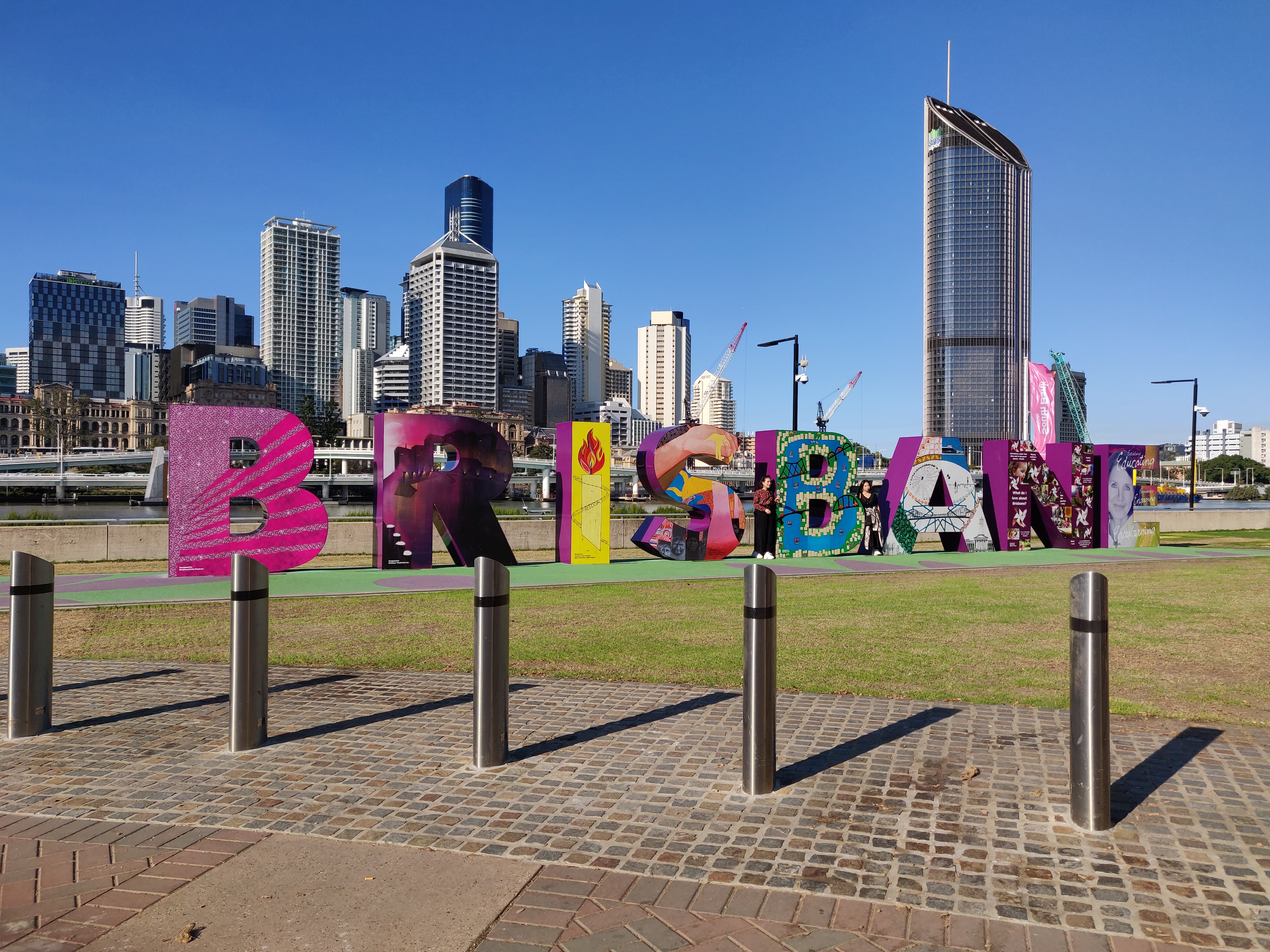