I admit it, we love a bargain or even better something for free so when we heard that you could enter Córdoba’s famous Mezquita-Catedral for free between 8:30 and 9:30 Monday to Saturday, we decided to take up the opportunity. We made sure we woke in plenty of time as it was about a ten minute walk. It was quietly eerie as we made our way to the Mezquita-Catedral in the pre-sunrise light, although as we came closer we saw a few more walkers.

On arrival at the entry door we were pleased to only find 4-5 others in front of us. We were even more pleased to be admitted a couple of minutes before 8:30, when, according to our mobile phone clock it was 8:28. It was a massive mosque. Archways lead in all directions. Due to the early hour the lighting gave it a wonderful intimacy though.

The best part was that you could take photos and have almost no one in them.

Many of the chapels were gated off

as was the cathedral section, although we could still see over the gates to the dome, 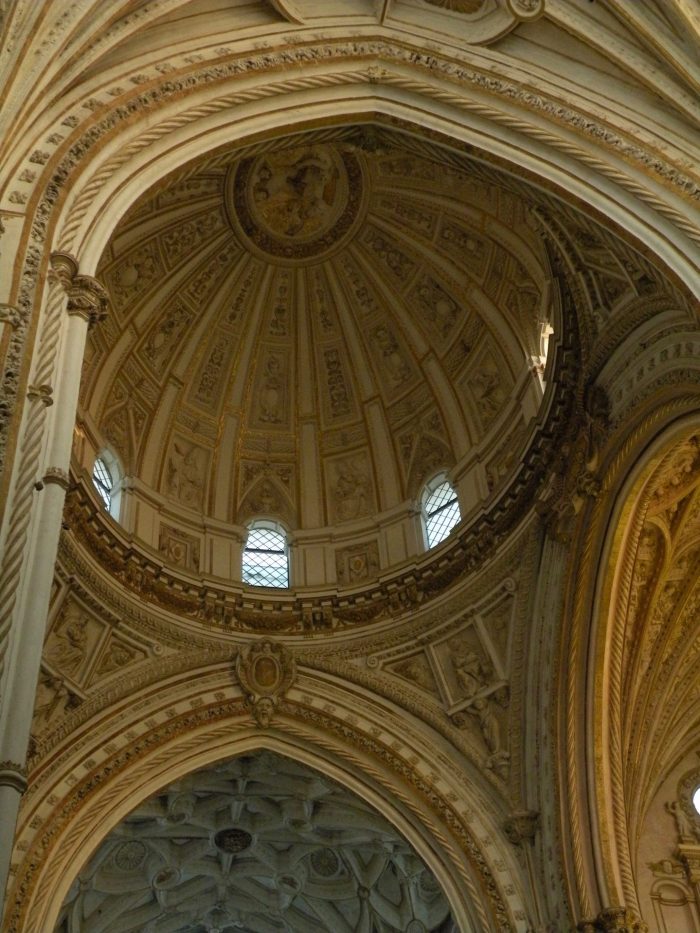 This chapel had beautiful iron gates. (Clearly someone had started work early.) 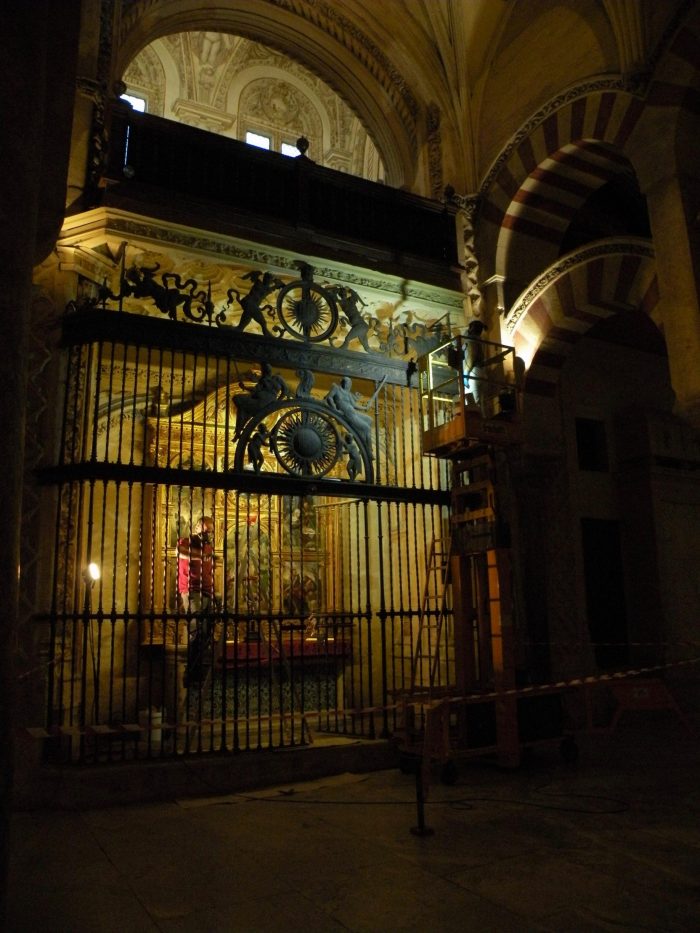 There was small museum gallery on one side. It was interesting to see the detail of some of the workmanship, although the ability to read Spanish would have helped.

As we moved around quietly we couldn’t help but be awestruck with the detail and skill of those who had built and decorated the original Mosque of And al-Rahman 1 before it was changed to a place of Christian worship in 1236. In the 1520s Bishop Alonso de Manrique decided to build a Christian Cathedral in the immensity of the forest of columns. The project was begun in 1523 by architect Hernán Ruiz I. However in retrospect it has been acknowledged that architecturally the conversion to a cathedral was probably not a good move. Here’s a few more photos showing the magnificent detail. 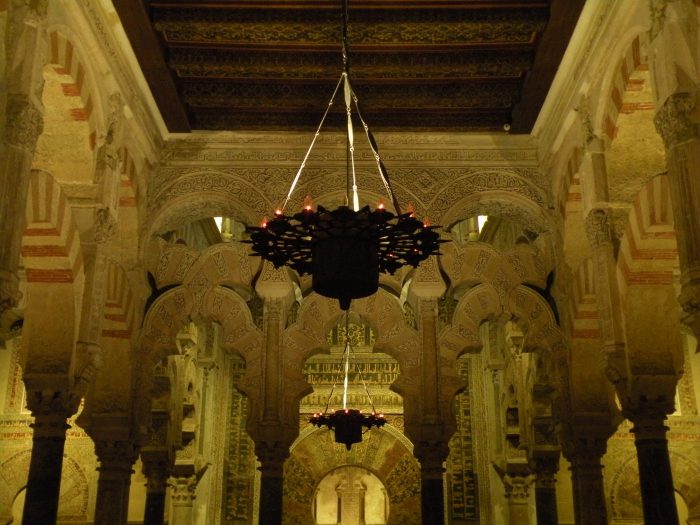 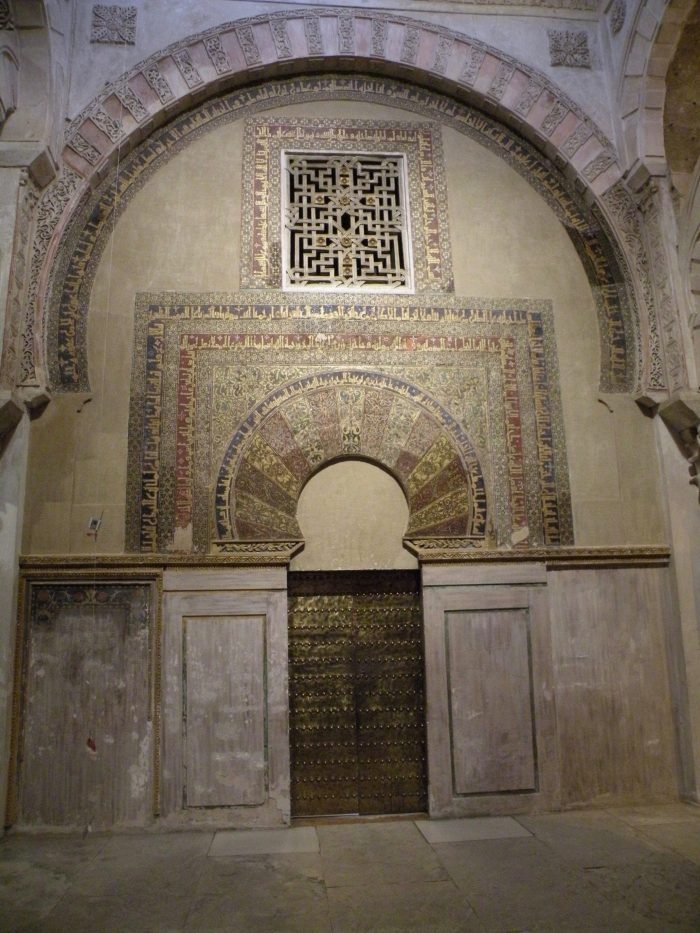 Our time in the Mezquita-Catedral flew by and we noticed more and more people moving around so the quiet reverent atmosphere we had enjoyed in the beginning was lost. On our exit we checked out the belltower. Originally there had been a minaret in this location. However in 1589, following an earthquake the minaret was enveloped by the current belltower.

As we left the complex I took one last photo from the exterior. 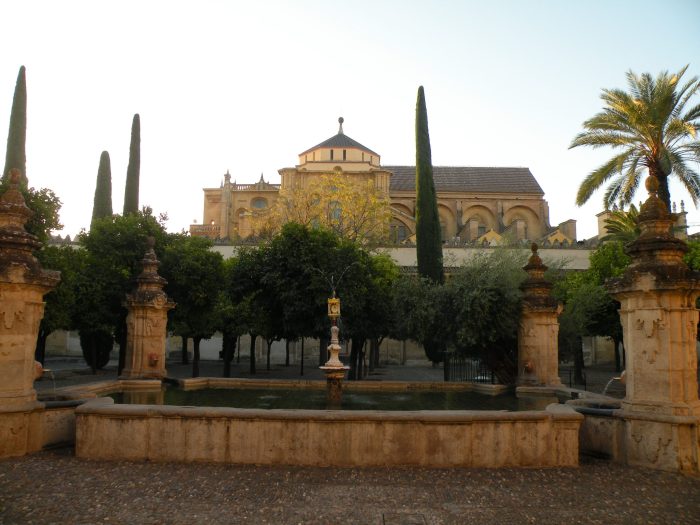 We made our way back to our hotel via the Roman Temple archaeological complex.

The excavation is a work in progress.

Back at the hotel we ate and packed up before walking through the Victoria Gardens to the train station. Sevilla awaited us.

One thought on “Córdoba, day 3”

Oops! Didn’t check the setting on the camera after our scenic flight over Fraser Island and ended up with a few overexposed (aka arty) photos of the SS Maheno.
Now you see us, then you don’t!
Another collection of shots from our Fraser Island scenic flight- these ones from the flight back over the island and back down to our landing on the beach. Such a fabulous experience.
Outbound aerial shots on our Fraser Island scenic flight. Shots 5&6 show the wreck of the SS Maheno and I particularly like the last shot of the small butterfly shaped lake.
All aboard our plane for a flight over Fraser Island. Yes, it takes off and lands on the beach on the east side of the island, the world’s biggest sand island.
One last blue hour shot from our return trip to Hervey Bay after our whale watching afternoon aboard Whalesong.
Scenes from our return trip to Hervey Bay after our whale watching afternoon. From blue to golden skies.
Sunset on our whale watching trip with Whalesong.
On our trip back towards Hervey Bay Marina came upon another pod of humpbacks so here’s one last batch of whale snaps.
Felt really fortunate to see lots of action from a couple of migrating humpback whales up close. Here’s a few more shots which I hope you’ll like.
Really happy with this series of shots of one of the whales near us using the sports setting on my Nikon.
Another short series of humpback whale shots from our Hervey Bay whale watching trip. Just fantastic to be up so close to the action.
Some more whale watching snaps from Hervey Bay.
Really pleased when the first pod of three humpback whales came so close to our whale watching vessel, Whalesong.
Here’s what we saw heading out on Whalesong for some whale watching before we were in the ‘whale zone’.
Just checking out Whalesong, the catamaran we sailed on to do a bit of whale watching whilst in Hervey Bay.
Pelicans in Hervey Bay marina.
One of the more unusual vehicles we have been stuck behind as we caravan around Queensland. Took us a while to overtake it.
Enjoyed our walk through this Melaleuca forest at Kommo Toera Trail in Mackay.
This is the view looking in the opposite direction from Lambert’s Lookout in Mackay.

The second big attraction in Longreach that we visited was the QANTAS Founders Museum. As I previously mentioned booking ahead is essential. Sadly, due to the influx of travellers from the Birdsville Big Red Bash, by the time we came to book our days and options were limited. So on our last day we visited […]

Back in Barcaldine we had sundowners with the couple in the caravan next door and visiting the various sites in Longreach and Winton entered the conversation. We had been thinking of booking a few days ahead but they mentioned that at least a week ahead would be wise due to the high numbers of caravanners […]

Well. We finally reached Longreach just after midday. From Dromana it had been just over 2000 kms. The reality was that I had planned this trip during January of 2020 and due to covid19 lockdowns it had taken us nearly two years to actually arrive here with our caravan. The trip north had given us […]